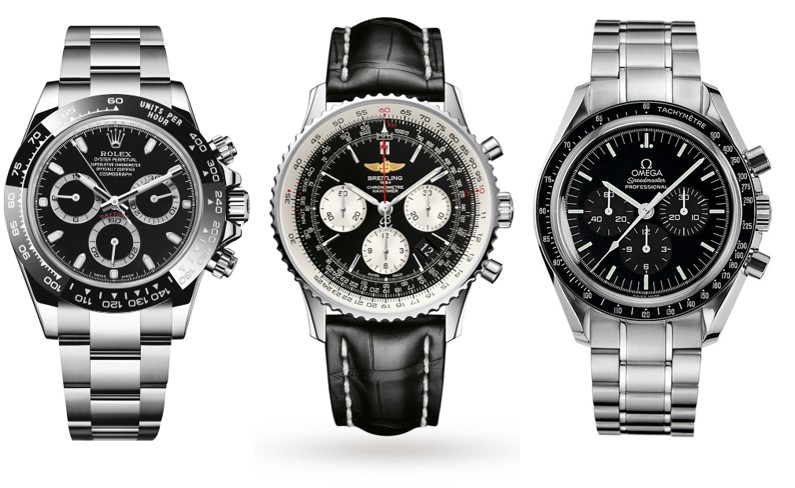 Chances are if you were looking to buy a chronograph, you would probably choose one of three chronographs. These three watches are the most iconic, most famous and easily recognised chronographs in the world. That’s not to say that there aren’t other hugely iconic or famous chronographs, but put simply they are not in this league. Let me introduce you to the “Chrono-trinity”. The Rolex Daytona, the Breitling Navitimer, and the Omega Speedmaster. Each with its own unique heritage, these are the worlds most desirable chronographs. 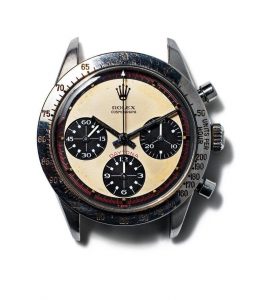 Daytona ‘Paul Newman’ came up for auction with Philips and sold for a record breaking $17.75m. Making this watch arguably the most desirable watch in the world. The Daytona’s fame was solidified by the romance and ownership of the watch by Paul Newman, who was photographed for an Italian magazine wearing the watch and subsequently its popularity rose exponentially. A talented and celebrated actor but also an avid motorsports enthusiast, political activist, and generous philanthropist, Paul Newman was in the public eye and and extremely fashionable man who many looked up to. Paul’s wife Joanne bought him the watch and had the back engraved “Drive very slowly Joanne”. So if you were looking for a chronograph, a Rolex Daytona would be as good as any place to start, however since the starting price of a new Daytona is over £9000 it is expensive, and pre-owned Daytona’s hold their value very well. “Paul Newman” Daytona’s are worth many, many times more.

In the 1940s, Breitling added a circular slide rule to the bezel of their chronograph models for use by aircraft pilots, and this became the famous Navitimer model. This allowed pilots to perform time/speed/distance calculations for navigation purposes and became an essential instrument. As a pilots watch these were big at 47mm allowing them to be read and used on the outside of pilots jackets. 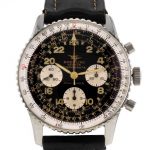 In 1961, Scott Carpenter, one of the original astronauts in the Mercury space program, approached Breitling with the idea of incorporating a 24-hour dial instead of the normal 12-hour dial. This was needed because of the lack of day and night during space travel. Breitling complied, and produced the 24-hour Navitimer which Carpenter wore on his 1962 space flight. Breitling then proceeded to produce the 24-hour version as the so-called Cosmonaute Navitimer. Although the Navitimer is significantly cheaper than the Rolex Daytona, it is still a significantly expensive watch. The 24 hour Cosmonaute Navitimer takes quite a bit of getting used to and is not a popular watch these days, however Breitling have continued to manufacture the Navitimer as one of the most popular icons in its range. Traditionally the Navitimer was powered by the Valjoux 7750, however Breitling now offer it with their latest B01 in-house chronograph movement.

The Omega Speedmaster – the one thats traditionally associated with space, is arguably the most iconic of the three and also the most financially accessible. This watch (very much like the Daytona) was a racing chronograph originally and only through NASA looking to find a watch that would serve their astronauts well in space did the Speedmaster become synonymous with space, creating the heritage it has today. 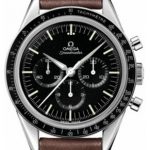 Its heritage was further solidified by its use on Apollo 13 when it was used to time a precise burn of 4 mins 24 seconds to get the module on the right trajectory to get home. Interestingly the Speedmaster unlike the Daytona and the Navitimer is a manually wound watch not an automatic. While there have clearly been a number of variants and derivatives of both the Rolex Daytona and the Breitling Navitimer, none can compare to the quantity of models and special editions that Omega have released over the years – the number is quite staggering!

So each watch has its own unique heritage cementing its place in history and the hearts and minds of collectors.

The danger is that they are the obvious or lazy choices for a chronograph. They are typically bought by two groups. The first group are ordinary people who have come into some money and have decided they want a decentwatch and that they don’t want to buy a Rolex Submariner. So they these three provide an alternative at different price points. The second group are watch collectors who for some reason need to ‘tick a box’. They have to have a particularly famous or iconic piece. If you watch interviews with watch collectors you will hear them even use language like this “…. and of course I have the speedmaster……” its as if its a necessary thing for any serious watch appreciator or collector to have to do if they are to be taken seriously and that to me is ridiculous, because you’re buying a watch and adding it to your collection not because you actually like the watch or that it suits you, but because your collection wouldn’t be complete without it.

There is however a third group of people who buy these watches. Those who have admired for considerable time the visual aesthetics of one of these, and after trying on a number have bought one because it suits them & their personality, style, attire and they wear it on a regular basis & wouldn’t be without it. To those I give you my respect for this is the only reason you should buy one and to you I say: enjoy your timepiece!

For the rest who are tempted to buy one because they feel they need to, please dont. You will regret it as with all purchases, if your heart is not in it you will end up selling it at a later date or worse, never admit it to yourself and after having spent considerable money on it will be constantly defending the purchase to people who never see you wear it. Instead, there is a whole wealth of other chronographs that have been made over the last 80 years or so that offer so much. Take your time, investigate and find a piece that really suits you, and you will love it for years to come.

So what are your thoughts? Are you saving to buy one or have you bought one? what’s your experience of owning it been? We’d love to hear from you.