An evening with ORIS

This week I had the privilege of being invited to an Oris VIP evening where I had the opportunity to meet with their Chairman Urlich Herzog. I must admit that until very recently, Oris was not a company that I knew much about so this was a great opportunity to dispel myths, learn about the brand, and spend a little time in good company with some beautiful and somewhat unusual timepieces.

Ulrich is not your typical Chairman. He’s warm, friendly and approachable, and certainly not what you think of as a typical “chairman of the board” but then again he’s not come from that corporate culture. You see, unlike many Swiss watch manufacturers, Oris is still a privately owned business and one of the few remaining Swiss watch manufacturers that maintains its independence and is not subject to the influences of a parent group. And to this extent Ulrich leads the brand much like a father leading a family. What is utterly apparent is that he has a personal passion for the company, the brand, it’s history and it’s place in Swiss watch making.

Founded in 1904, the company became the largest employer in Hölstein where it was founded. In 1925 it began to fit bracelet buckles to pocket watches making them its first wristwatches. In 1927 George’s Christian (ORIS co founder) dies and Jacques-David LeCoultre becomes president, who later will go on to found Jaeger-LeCoultre. A year later Oscar Herzog (Georges Christian’s brother in law) takes over as general manager and remains there for 43 years. In 1970 ORIS became part of what will become the Swatch group and barely survived the “quartz crisis”. With ORIS in decline, in 1982 Ulrich Herzog together we Dr Rolf Portmann lead a successful management buy out of ORIS restoring its independence electing to abandon quartz and leaning on its heritage, produce only mechanical timepieces. For the last 36 years like his ancestor, Ulrich Herzog has led ORIS as a father figure.

This leads me to Oris’s more recent innovations. In 2013 ORIS created a dive watch with an integrated depth gauge. A special crystal with an integrated channel was created allowing water to enter a chamber under pressure and therefore mechanically indicating depth. This was integrated into the face of the watch without compromising the primary water resistance. An innovative approach by all means. 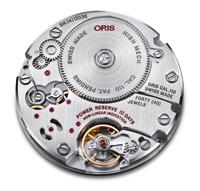 What’s more – recent innovations in movements able to deliver extended power reserves from other manufacturers have done so using twin barrels – where energy is stored and released using two separate springs connected through gears. ORIS on the other hand have accompanied this remarkable feat using a single barrel. This saves valuable space in the movement.

It has always amazed me that manufacturers have added a power reserve indicator to an automatic movement as this seems a somewhat superfluous endeavour, as the watch will never run out of power while you’re wearing it. There is admittedly a small truth that a watch will be more accurate when it’s fully wound but it’s a trivial matter to wind and set an automatic and as long as it is worn, the movement will be constantly ‘topped up’.

However a power reserve indicator on a manual wind watch is the perfect complication for two reasons. First the obvious – it shows how long the watch will run before needing to be wound. Allowing the wearer to wind when necessary, keeping the watch in motion and not running out. However more importantly, automatic watches have a clutch mechanism that ensures no matter how much movement is exerted on the rotor, it cannot overwind and damage the movement. A manual movement does not have this and so it is very important the movement is not overwound, damaging the watch. So the presence of a reserve indicator on a manual movement is is clearly the most beneficial complication to have.

Building on the foundations of this movement ORIS have continued to iterate and expand their movement range adding a date, second time zones, a moon phase, and more. With all of this innovation in house, most brands would command a price far in excess of ORIS’s proposition. However as we have seen, ORIS does not follow traditional corporate culture and it’s philosophy of real watches for real people prevails, keeping Swiss watch innovation affordable. 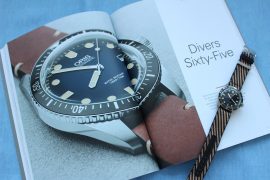