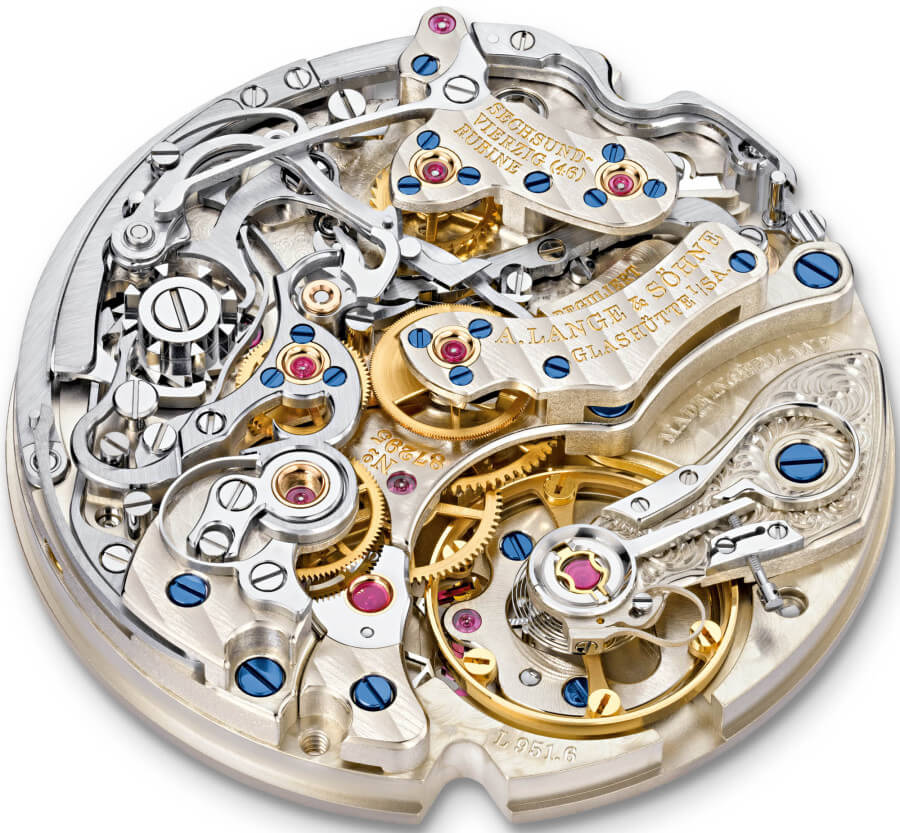 An introduction to chronographs movements

When it comes to chronographs, the movement is king, but did you know that there are a number of different ways of making a chronograph movement? Manufacturers will typically charge a hefty premium for a ‘high end’ chronograph so why is this and what differentiates one movement from another?

Firstly, There are two types of chronograph – modular & integrated…

The benefit of a modular movement is that if there’s a problem, a watchmaker can separate the two halves, and work on the just the bit that needs his attention. This also keeps costs down in both time, and replacement elements, as it’s possible to replace one or other elements (base movement or chronograph module) rather than the entire movement.

On the other hand, modular movements suffer from a lubrication issue: as the movement is basically built in two halves, unlike an integrated movement, each half needs separate lubrication and can, if left for too long dry up. As a guide, it is therefore important to run the chronograph on the movement periodically to ensure its all running smoothly and the lubrication has not dried up. Running the chronograph once a month for an hour should help prevent this.

One of the easy ways of identifying a modular movement, is to look at the placement of chronograph pushers on the case. If the two chronograph pushers sit higher than the winding crown, then they are attached to a module sitting on top of a base movement.

An integrated movement as you might imagine incorporates all the components in a single design. This invariably delivers a slimmer overall thickness of movement, and will include all of the expected characteristics of a chronograph. Overall it’s more efficient not to have space wasted with extra plates and drive wheels to transfer power to another module. A typical example of an integrated movement is the valjoux 7750 – one of the most prolific chronograph movements used in watchmaking for decades.

Again, on a side view of the case, if the chronograph pushers line up with the winding crown then they are part of an integrated movement.

In addition, there are two architectures of chronograph movements, cam actuated and column wheel. As you might imagine each has its benefits, so I’ll attempt to cover some of the basics.

Incidentally, all modular chronographs are cam operated, as they have a limited depth to build the chronograph module without making the entire movement prohibitively thick whereas in an integrated chronograph, there is more depth to be able to include a column wheel which is deeper. 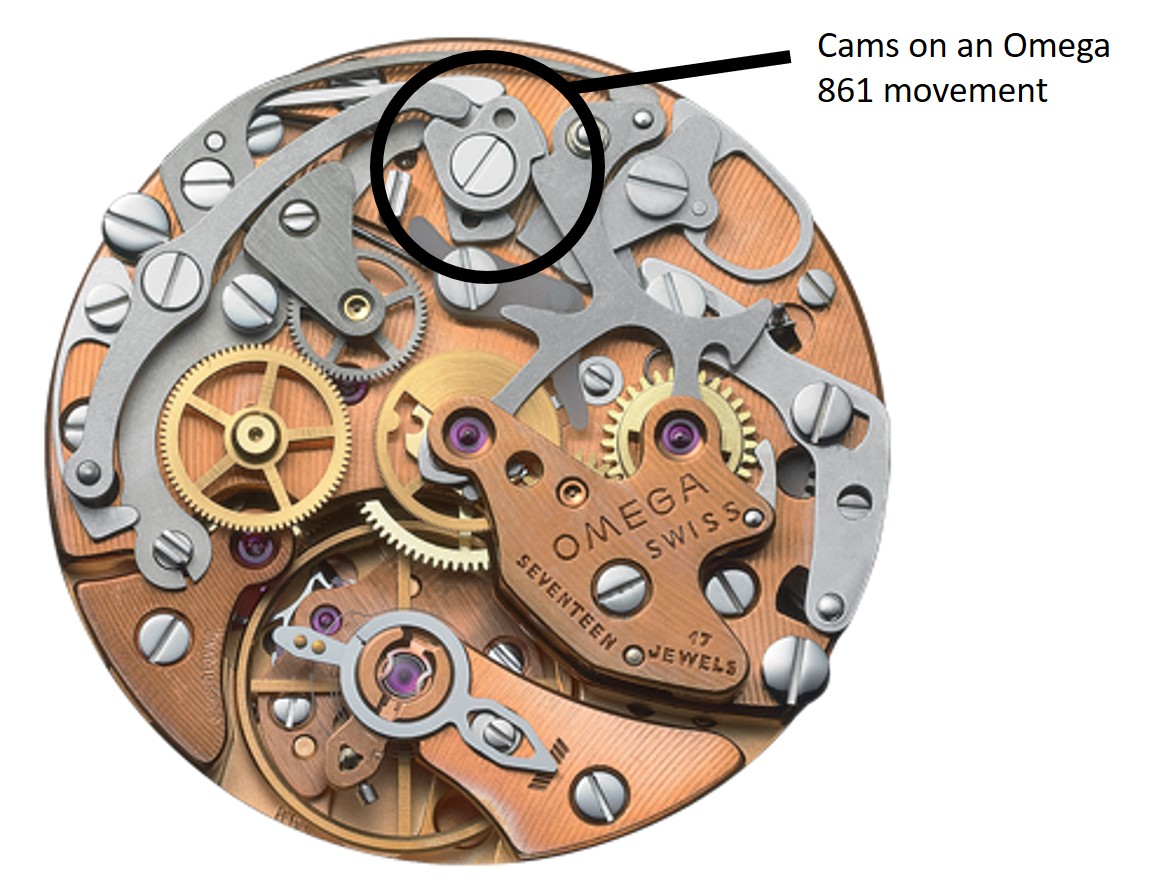 A column wheel was designed to do the same job but with less parts. Instead of multiple cam plates that are stacked, a single turret shaped wheel is used. However as you can imagine, this is a more complicated and difficult part to manufacture. However with less parts come less friction (and therefore wear) and also a more consistent feel requiring less pressure to actuate.

Many have also noted that the operation of a cam actuated chronograph experiences a jerk when it sets off however this has been attributed more to the lateral clutches present in cam operated chronographs as opposed to vertical clutches on column wheel chronographs. 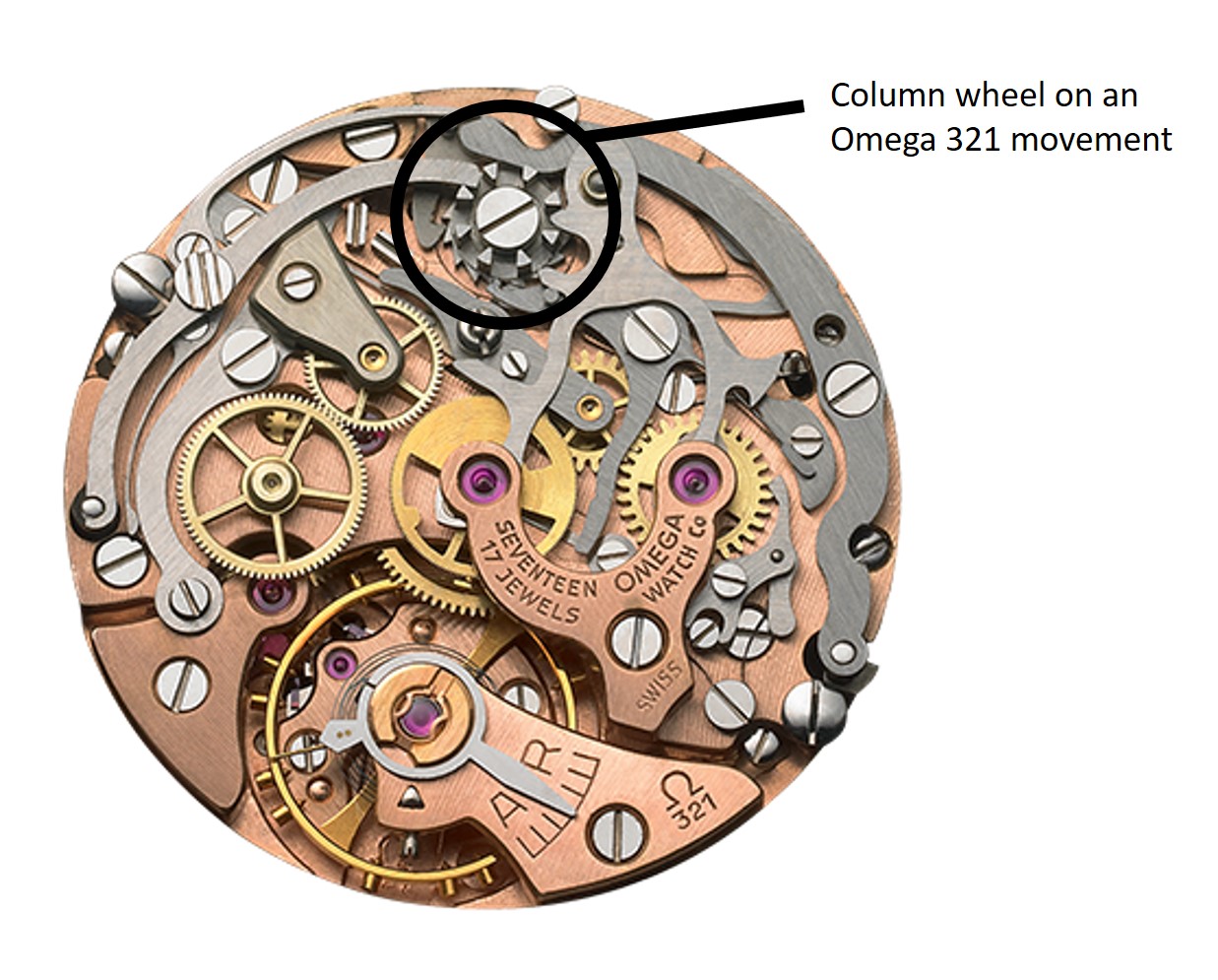 So column wheel chronographs are more complicated to design and build resulting in an increased cost by the manufacturer however these movements are smoother to operate by the user, and more desirable as a consequence. Column wheel chronograph movements include the infamous Zenith El Primero and the manually wound Omega 321 movement used in the original Speedmaster. As you can imagine, pretty much all high end chronographs have column wheels including Patek Philippe’s CH 29-535 PS and A. Lange & Söhne’s L951.5

You may have noticed that trying to get hold of an original Speedmaster with a 321 movement will be a little pricey as will almost any watch with an El Primero movement (which not only has a column wheel by also a Hi-beat of 36,000 vibrations per hour) let alone a Patek or Lange.

However would it surprise you to learn that you can in fact buy a column wheel chronograph for a few hundred pounds that has a movement stretching back nearly 80 years?

Back in the 1940s Venus had created a pair of chronograph movements that became ubiquitous. The Calibre.170 and Calibre 175. The Calibre 170 was a twin register, vertically aligned, manually wound column wheel chronograph, and its sister the Calibre 175 was identical except its chronograph registers were horizontally aligned. These were not only highly regarded as exceptional movements but were adopted by a huge quantity of manufacturers including Breitling, Aristo, Birks, Helbros, Telda, Silvana, Bovet, Loyal and many more.

By the 1960’s, Venus decided to sell off the movement to raise capital in the light of newer architectures and future developments and sold the rights (as well as the tooling to produce the movements) to the Chinese who in 1963 in Tianjin released a pilots chronograph for the Chinese airforce. In 1992 the Tianjin Seagull Corporation was created as the foundation for the Seagull watch brand.

In 2011, Seagull re-issued this watch (the “Seagull 1963”pilots chronograph) which contains the very same movement. Seagull refer to this movement as the ST19 movement however this is in fact the Venus Calibre 175 still produced using the machinery and tooling procured during the 1960’s.

This watch is still available to buy today for under £300 (in a variety of models including the original 37.5mm with a hesalite crystal) which quite frankly is an astonishing value proposition.

If Seagull are able to produce this watch today with a manually wound column wheel chronograph movement, there is nothing stopping brands such as Omega producing a modern column wheel chronograph. If Omega released a column wheel as part of their yearly announcements I can imagine that it would only be part of a limited edition re-issue commemorating the Speedmaster and based on the last two limited editions – sold out within minutes. So if you would like to own a chronograph with a piece of heritage and history without breaking the bank, and from a supplier that is not sold out within minutes, look no further…

Do you own a column wheel chronograph? – What’s been your ownership experience? – let us know in the comments below.