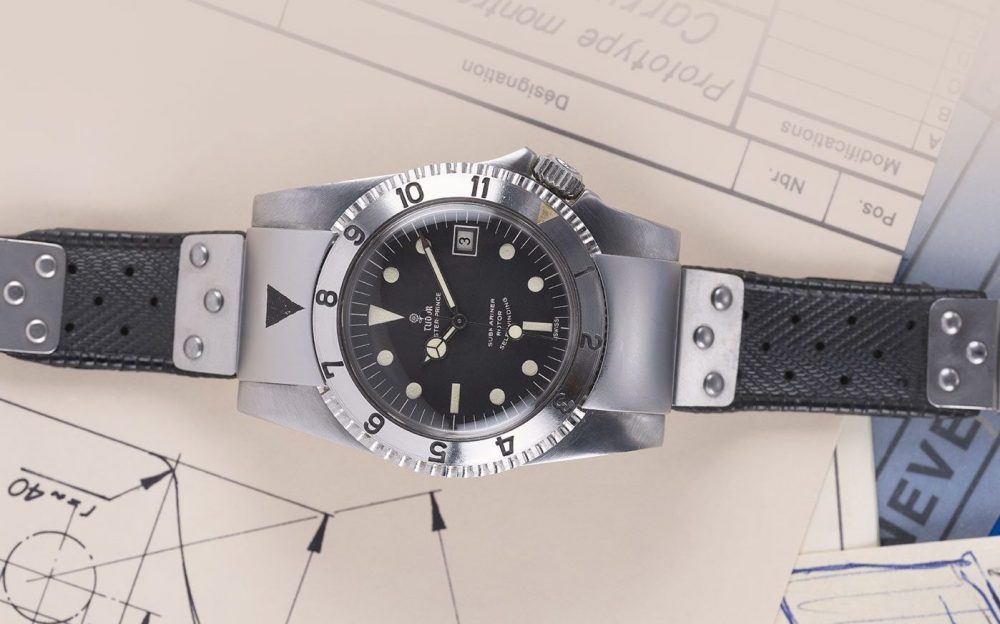 While the world was provided with teaser shots of an hour index close-up from Tudor leading up to Baselworld, the watch community started to salivate at the prospect of Tudor releasing a Submariner, and the internet was awash with rumours connecting the significance of the year 2019 as an anniversary of note. However the world was simply stunned by what Tudor actually released. The “Black Bay P01”

Back in the late 1960’s after having provided watches to the United States Navy, Tudor embarked on “Project Commando” to meet the US Navy’s latest specifications and requirements for their new watches. It was here that a prototype was created that has seen little light of day since as Tudor did not win the contract to supply the US Navy.

The design incorporates a special locking mechanism that is integrated into the pivot points for the strap. In effect, once the watch is placed on the users wrist and the strap is tightened, the pivoting clamps on the top are pulled down and the teeth lock the rotation of the bezel thereby preventing accidental rotation. However this does mean that in order to actually rotate the Bezel intentionally, the wearer has to take the watch off their wrist.

While the engineering behind the design is clever, it has also resulted in an over-engineered solution that compromises usability in the modern world we live in.

Unfortunately this industrial design aesthetic has not been received well by the watch community. Journalists who have been present at Baselworld have been respectful of Tudor and some have gently acknowledged that it is “better in person…” However social media and most notably Instagram has been awash with expressions of horror from collectors and watch enthusiasts alike mostly expressing their utter dismay.

Tudor’s stole the limelight with the re-birth of the brand in 2012 when it launched the Black Bay. A Watch designed by Davide Cerrato and drawing on a number of heritage models to create a watch that ostensibly embodies the modern-vintage timepiece. For years Tudor could do little wrong as it continued to iterate on the success of previous years, re-building the brands’ cachet of credibility. However in the years following Cerrato’s departure for Mont Blanc, Tudor has come under heavy criticism for its lack of imagination and becoming a one-watch success as almost every model is a new Black Bay model of some kind.

Ironically, the two most notable watches from last year’s Baselworld – The BlackBay 58 and the BlackBay GMT were so hot that demand for these is still outstripping supply with many still unable to buy either watch a whole year later.

The forthcoming months will be interesting ground for Tudor who has won the hearts of so many since 2012 as we will witness the popularity of their most divisive watch so far.

What do you think of the new BlackBay P01? Let us know in the comments below.

lots of change at hodinkee