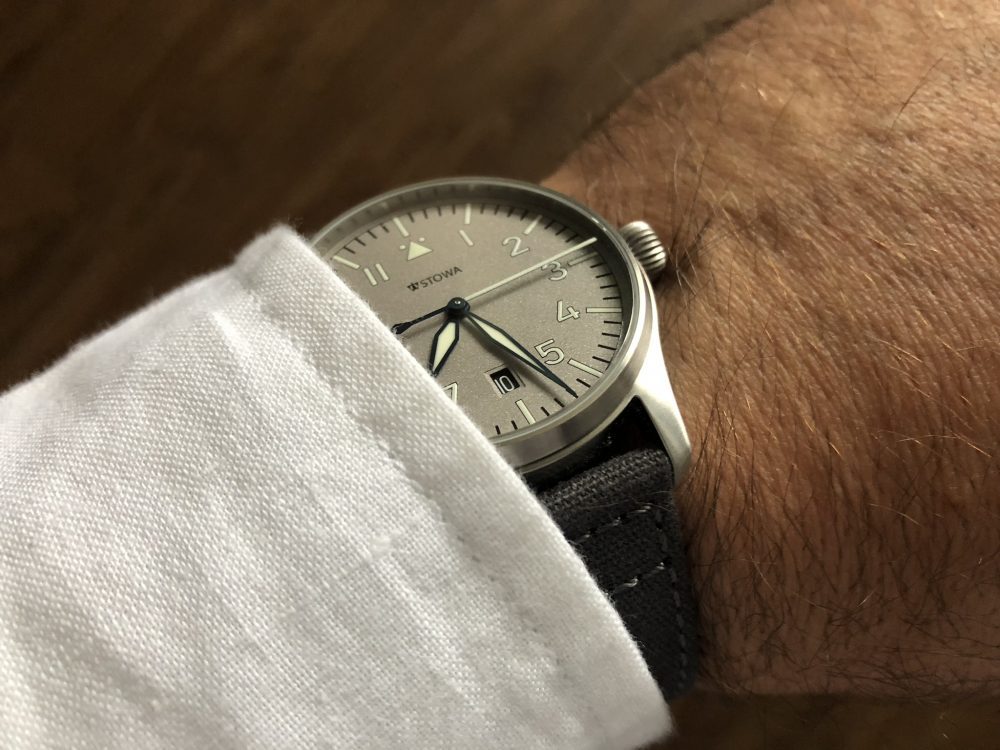 The German Flieger or Pilots watch in the form it exists today is more a modern interpretation of traditional pilots watches produced and worn during world war II where these watches were strapped to the outside of flight suits.  Although the flieger watches available today are much smaller than the 55mm watches produced during wartime, they carry many of the same features and specifications, drawing their identity from their heritage in producing clean, functional and reliable watches. While many brands might be accused of producing year after year the same watch, Stowa have continued to evolve and innovate their take on the traditional pilots watch and have more recently introduced a more contemporary model called the Ikarus. So we reached out to Stowa who were kind enough to send us one to spend some time with.

A little history of Stowa…
In 1927, Walter Storz founded Stowa in Hornberg, Black forest, Germany. In 1935, just 8 years later the company had outgrown its building and moved to Pforzheim. By 1937 Stowa had been producing numerous ‘Bauhaus’ watches inspired by the German school of art, design & architecture of the same name. With near constant growth, in 1938 Stowa moved to their new building which was built for them in Bismarckstraße in Pforzheim. However this growth would show little signs of letting up as the start of World War II brought even more demand…

Although it had long been established that pilots required accurate timekeeping for navigation, flight time and fuel use,  the start of the second world war meant the German airforce – the ‘Luftwaffe’ was going to need watches in bulk. Specifications for official flieger watcher were drawn up and 5 companies commissioned to produce them –  IWC, Laco, Wempe, A.Lang & Sohne and of course Stowa. These specifications were designed to ensure that no matter who produced these watches, they would be physically and functionally the same – these were critical tool watches after all. This specification included the case size (55mm) to aid legibility in poor conditions, crown – so it can be easily operated by pilots wearing gloves, the dial needed to include the (now iconic) triangle with two dots easily denoting the 12oclock position and confirming orientation, the dial, hour, minute, and seconds hands were all coated with radium in order to provide strong luminescence, and of course were accurate and able to be synchronised to a reference time (had a hacking function).  The German Testing Office created an appropriate designation for the specification identifying that the watch was approved for flight (FL), navigation (23), and aeronautics (883) thus creating the official Flieger designation of FL23883 which would be applied to the watches from all 5 manufacturers. 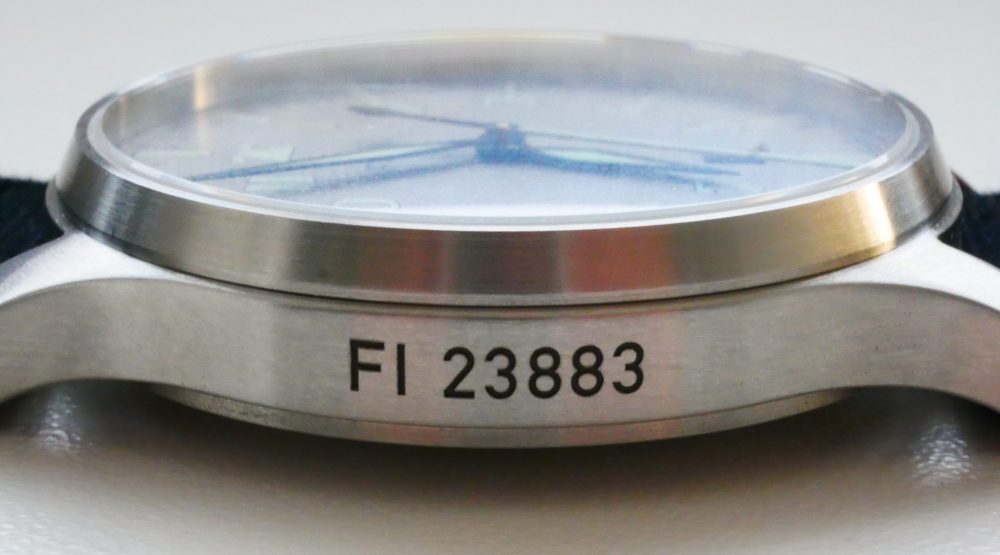 Our first impressions…
Its always reassuring when a manufacturer provides an ‘appropriate’ box for the watch they are selling. Its not a good sign when its obvious that a large proportion of the price you have paid for the watch has gone on the box and presentation. Indeed Omega have often been chastised for some of the more ridiculous packages that are more akin to a suitcase and clearly cost a lot of money but once home will be shelved or put in the loft rarely to see the light of day again and making you feel like you have wasted a proportion of what you spent on the box. Alternatively if you’re spending good money on a good watch, receiving it in a carboard sleeve akin to free gift from a Kelloggs box of cornflakes is also not very reassuring! Its therefore refreshing to see Stowa provide the Ikarus in a modest but sturdy metal box that is sure to protect the watch, is not enormous, and yet is not overly expensive. The box is lined with a simple leather lining and contains the Ikarus and the Stowa guarantee.

The case of the Ikarus has a matte finish. Although it might look like its brushed, upon closer inspection there are no brush marks at all. The case is actually hand ground to a matte finish which starts to show how serious Stowa are about even their more affordable watches. The case measures 40mm without the crown, and is 10.2mm thick from top to bottom. These are a sweet-spot for proportions and allow it to wear comfortably on a variety of wrist sizes where it neither looks too large on a smaller wrist nor out of place on larger wrists, and allowing it to slip easily under the cuff. The flieger designation ‘FL23883’ is laser etched into the side of the case as a visual reminder of this watch’s heritage. 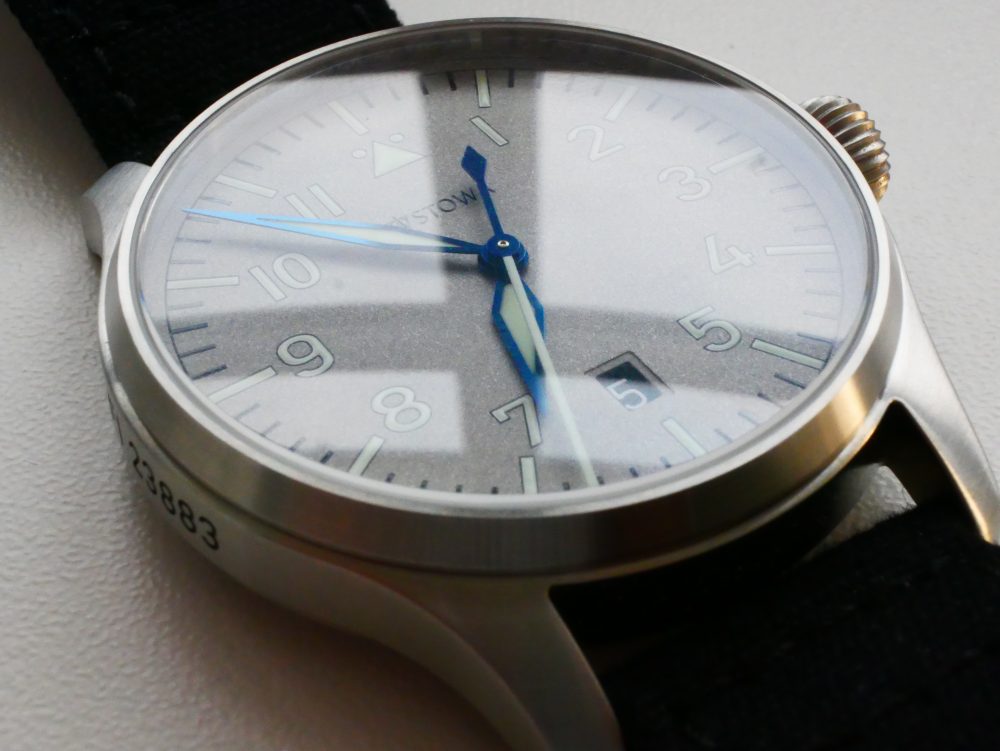 The Dial of the Stowa Ikarus is the most notable element setting it apart from its peers. As Stowa continues to innovate and evolve the presence of the Flieger bringing it into the modern era, they have created a beautiful grey metallic dial that starts to bridge the gap between a tool watch and something a little more dressy. This has been created by rhodium plating the dial and then bead blasting with glass beads. The indices are then painted in C3 Superluminova. 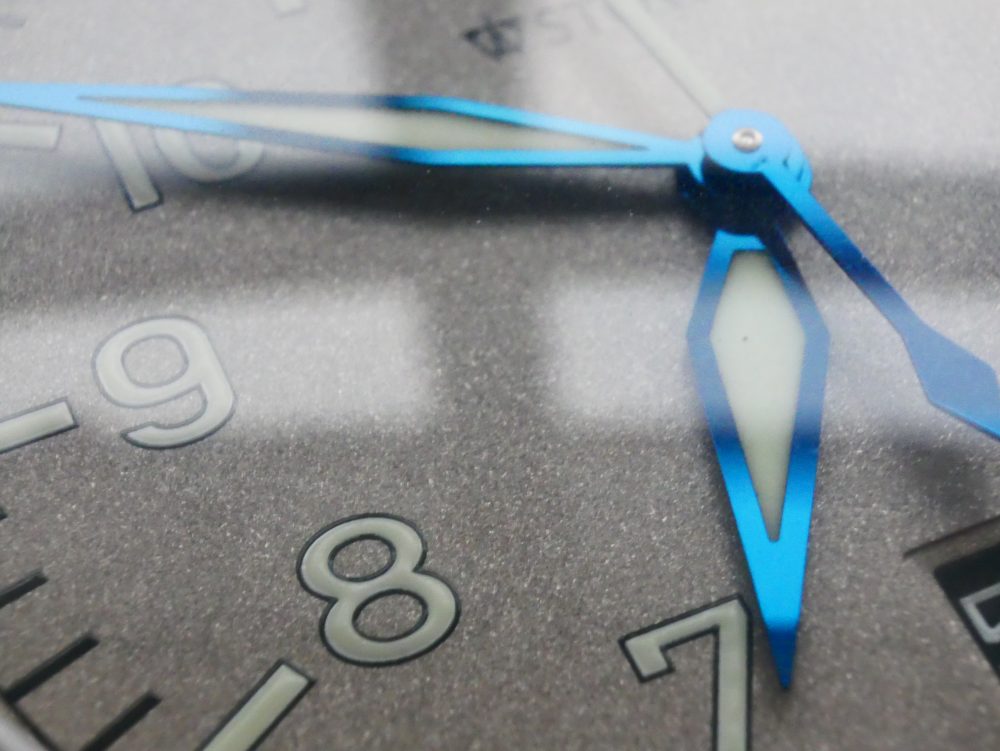 The hands are traditional flieger shaped hands and are thermally blued providing a subtle and authentic element of colour when the light catches them and are also filled with C3 Superluminova. This is well paired and contrasts with the depth of the grey dial behind. There is a date at 6 o’clock which has been thoughtfully executed. It does not ‘cut into’ any other element on the watch face and replaces the number 6 on the dial creating a balanced dial layout. To aid legibility, the date wheel has been implemented in black with white numerals which feels highly appropriate. Unlike a traditional Flieger the Stowa logo is subtly written on the dial under the traditional Triangle at 12. 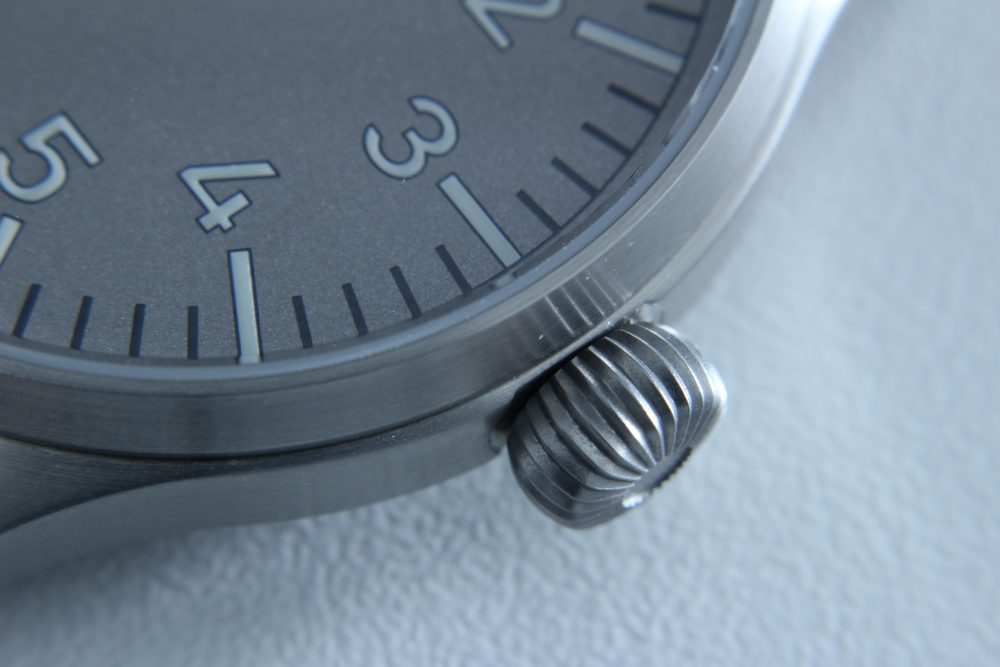 The Onion crown is well proportioned and easy to wind & manipulate. Its a nice attention to detail harking back to traditional pilots watches. For anyone who has ever had any discomfort from the crown digging into the back of your hand, this crown will help as its predominantly round with no sharp edges.

The caseback is secured with 6 micro screws and has a sapphire porthole to view the movement. The watch is powered by an ETA 2824-2 in its base grade. Customers may if they wish upgrade the movement to a Top Grade ETA 2824-2 movement or alternative the 2804 hand wound derivative. The movement is not highly decorated, however it is supplied with a nice custom Stowa rotor. If customers elect for the top grade 2824 movement, Stowa will supply a traditional Flieger rotor. This is far more functional in design and contains specification text for the watch adding another touch of heritage. 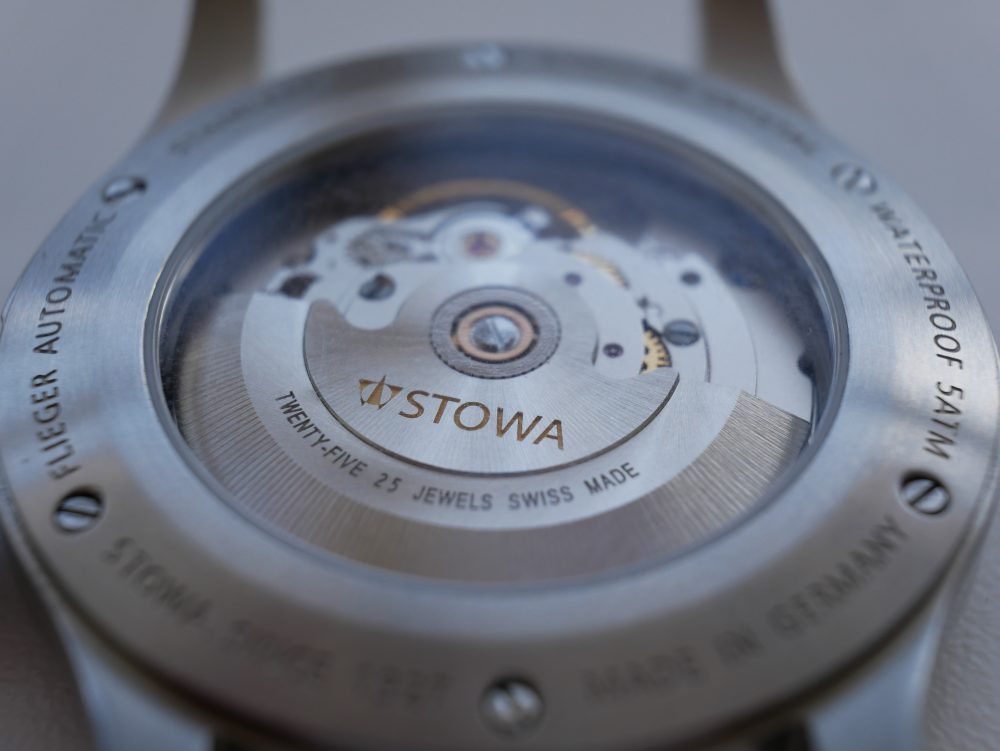 The leather strap was a welcome surprise. Without handling the strap you would be forgiven for thinking its more ‘industrial’ than it actually is. Visually it would appear that with three keepers – one of which being metal it is a rugged strap engineered to be robust above all else, however the strap is made from a soft supple leather that is extremely comfortable to wear. The tang buckle is a solid milled buckle signed Stowa contributing to the “engineered” theme.

However if you left the Ikarus on the strap it comes with, you would be doing the watch an injustice as it pairs well with so many other straps. Throughout the time we had the Stowa, we continually changed the straps allowing the watch to show its versatility. In fact we thought it was such a versatile watch that we used in on a photoshoot for an article on Haveston’s watch straps which you can take a look here.

Casually, Stowa’s own strap dresses the watch down well. It allows the watch to take on a more ‘rugged look and feel while being extremely comfortable to wear. Canvas two piece straps suit the watch well and we spent some considerable time with these on the watch as they complement the slender proportions of the watch also allowing it to slip neatly under the cuff.

While the Ikarus is no dress watch, it definitely passes for a smarter casual watch suitable for most environments. Whether hanging out in coffee shops at the weekends, at work, or anywhere in between, the Stowa Ikarus makes for a compelling all round watch. Able to slip discretely under a cuff with a shirt thanks to its dimensions or brushing off the more formal looks with jeans. Either way the Ikarus is right at home.

The Stowa Ikarus presents a great value proposition. Its a modern iteration of a traditional German Flieger by a brand steeped in history and heritage, and yet it breaks away – bringing contemporary style to an otherwise traditional timepiece. The build quality is typically German – well engineered simplicity delivering everything necessary and nothing superfluous. The display case back is nice and at this price point the inclusion of an ETA movement is welcome.

Its hard to find something not to like about the Ikarus. We would have preferred the watch to have had a 100m water resistance allowing the watch to be worn comfortably near and in water. Interestingly Stowa make a larger model of the Ikarus called the Ikarus Sport at 43mm with 200m water resistance. This larger sport variant uses all the same components including the dial from the 40mm Ikarus, placing them in a larger case with a thicker bezel being the only difference. 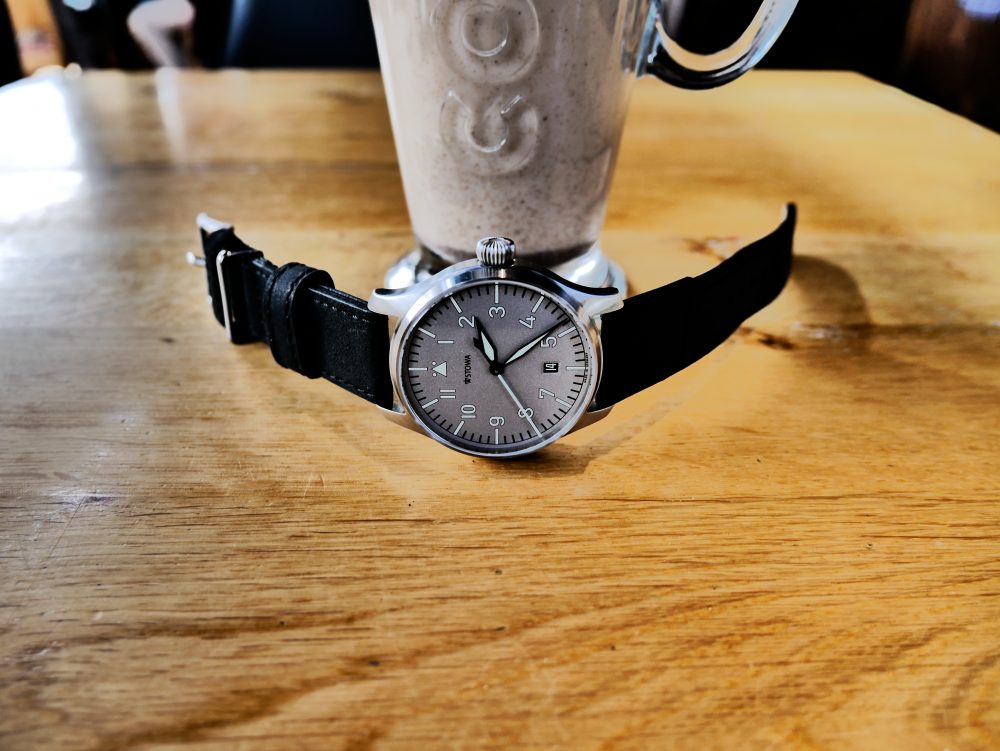 So if you are considering an ‘all round watch’ I would encourage you to take a look at this fantastic piece at a great price of £600 (€680) which makes a pretty compelling value proposition.

Do you own a Flieger from One of the 5 above – if so what’s your experience of owning one? or are you interested in buying a pilots watch? Let us know in the comments below.